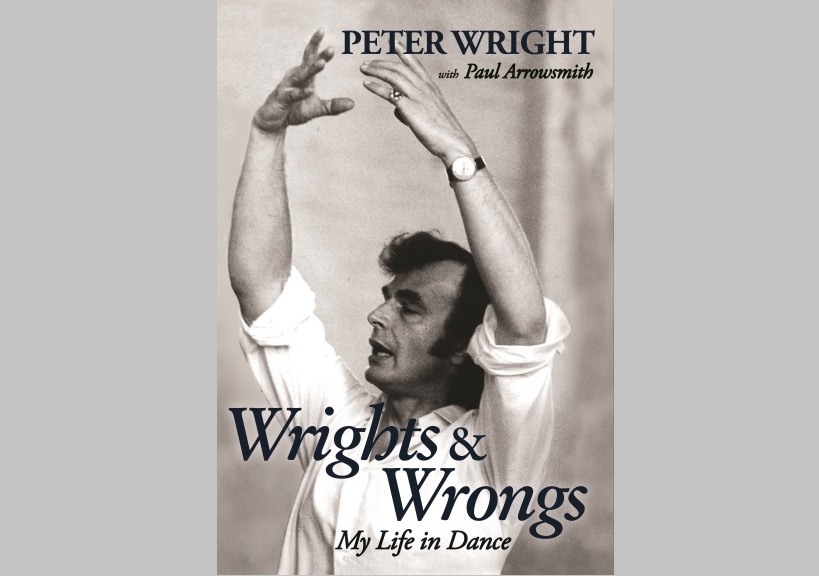 David Mead takes a look inside a fascinating new book – Wrights and Wrongs: My Life in Dance by Peter Wright (with Paul Arrowsmith)

Whenever Sir Peter Wright was first put in charge of anything, the typically forthright advice from Dame Ninette de Valois was to “Just get on with it.” It’s advice that’s stood him in good stead in a career that’s spanned over 70 years in ballet, modern dance, musical theatre and television; as dancer; choreographer; teacher, and company and television director. He’s worked with most of the greats of dance in the second half of the twentieth-century: Kurt Jooss, Pina Bausch, Ninette de Valois, Margot Fonteyn, Rudolf Nureyev, Marcia Haydée, Richard Craigun, John Cranko, the list just goes on. Wrights and Wrongs is about all that and more. It’s a gem of a story, and one long overdue being told. The book is also a fascinating look inside British ballet from the Second World War on.

Although now regarded very much as part of the British ballet establishment, Wright’s career developed in part away from London. He started with Kurt Jooss’ company when it was based in England, and later danced with them again for a spell in Germany. He also spent several years with John Cranko and Stuttgart Ballet. Add to that his work in other areas of dance and television, and it’s easy to see why he has always had such an enlightened perspective on dance.

Although Wright tells his story in Wrights and Wrongs, the book doesn’t work slowly through time. The chapters are rather organised by topic: Ninette de Valois, Television, John Cranko, Kenneth MacMillan, Being a director, Birmingham and so on.

There is sometimes a tendency for the flow to be interrupted as Wright dives off down a side street with an incidental story or background. The Cranko chapter, for example, includes lots about Sonya Hanna, Wright’s wife and his time with the Edinburgh International Ballet and Western Ballet Theatre. It can be slightly frustrating at times, and you do sometimes wonder where things are going, but equally it means the book is ideal for just dipping into. You can open it at almost any page, start reading, and not feel that you have to row back to discover what happened immediately before.

Wrights and Wrongs opens with a cracking story about Wright, then 16, fed up and miserable because his father would not allow him to train as a dancer, running away from his Hampshire boarding school with friend Peggy Barnsley, whose father just happened to be one of the school governors. The tale is funny, but it also reveals immediately someone determined, and who knows his own mind, something that comes through again and again.

More stories and anecdotes come thick and fast, each bringing someone or some event to vivid life, all told in Peter Wright’s easy going style. As anyone who has spent time talking to him will testify, it’s very much his voice that comes through. There’s something interesting, or something to smile about, on almost every page.

Some wonderful pictures are painted. An early one involves Violette Verdy rehearsing the pas de deux from Stars and Stripes at Covent Garden, and having problems with the conductor. Eventually, Wright tells us, she stopped the rehearsal, stared down at him, and said, “Non, non, no!” She then sang it for him as she wanted it, after which the orchestra burst into applause. Priceless!

Wright is not afraid to tell it as it is, or as he sees it. His opinions can be short and to the point. Even as a young man, he had strong views. On Rovi Pavinoff, leading dancer with the Anglo-Polish ballet, for example, “He considered himself to be rather good. I did not.” On Etude, a ballet by Nancy McNaught and one of the first things he was in after joining Sadler’s Wells Theatre Ballet in 1949, “I was not impressed by it or her.” On Nadia Nerina, “Nadia herself was the only person who ever thought she was musical.” There are many more.

Wright is quick with the praise where he feels it is deserved, though. Among those he clearly admires much is Hans Zullig, the Swiss star of the Ballets Jooss, and Pina Bausch, who Wright performed with during his second spell with the company in the 1950s. Wright clearly learned much from Zullig. He confesses the utmost respect for him and says he “loved him for the wonderful artist he was.” He also speaks glowingly of Bausch as a dancer and her ability to portray roles. “Pina seemed to have a magnetic ring around her when she was performing,” he says.

Admiration for Kenneth MacMillan’s work shines through, although Wright also talks at length about MacMillan’s insecurities and alcohol problems. He clearly has little time for Deborah MacMillan and her making changes when she stages her husband’s ballets however. His views on what she did to The Prince of the Pagodas and Isadora in particular are sharp and to the point. That’s not to say ballets shouldn’t be freshened up. They should never become museum pieces, he stresses, even the classics, but he feels there are problems with maintaining the feeling of the original if one changes too much, whether choreography or designs.

A late starter, Wright was never destined to be a great dancer, and while he was making a career for himself, an unexpected telephone call from John Cranko in July 1961 that proved to be a game changer. It was there that his choreography career truly developed and where he created his first classic, Giselle, and while he did make many one act works, it is the classics that he will forever be remembered for. His principles are must reads for any choreographer looking to tell a story. Most important, keep the story clear and credible, and make the characters strongly drawn. Then, make sure subsidiary episodes support the main action. And should anything be boring or out of keeping with the action overall, cut it (he admits he would love to do just that to the cygnets in Swan Lake). But while one can teach students about various choreographic devices, choreography itself cannot be taught, he believes.

There is so, so, much more. De Valois’ toughness comes through time and again. There is the story of Sadler’s Wells Royal Ballet’s move to Birmingham and how he was kept in the dark (not for the first time), and of course his long battle with the highly debilitating disorder myasthenia gravis, a battle that thankfully he won.

At 428 pages plus a list of Wright’s choreographies, plus a comprehensive index, Wrights and Wrongs is not a quick read, but Wright always has something interesting to say and it’s impossible to put down. There are also two sets of excellent archive photographs. Highly recommended.

A tale of two Giselles: The Royal Ballet in Japan