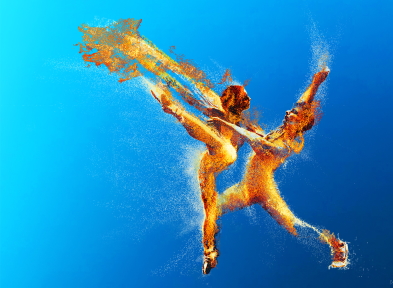 Having cancelled or postponed its previously announced programme, Sadler’s Wells has announced new activity for autumn, featuring a new digital season and the first live performances at the theatre since lockdown.

The first time that Sadler’s Wells has welcomed professional artists and audiences in a live capacity since lockdown will see Birmingham Royal Ballet bring a brand-new mixed bill, Lazuli Sky, for four performances from Thursday October 29 to Saturday October 31. The London dates follow sold-out world-premiere performances at The REP in Birmingham the previous week.

Lazuli Sky includes choreographer Will Tuckett’s new ballet of the same name set to John Adam’s Shaker Loops; alongside Valery Panov’s Liebestod, a powerful, visceral solo for the company’s male principals with music from Wagner’s Tristan and Isolde; and Our Waltzes by Venezuelan choreographer Vicente Nebrada, danced to a collection of Latin-infused waltzes which celebrate love, romance and passion.

All music will be performed live by the Royal Ballet Sinfonia.

Lazuli Sky is the first one-act ballet to be commissioned and presented by Carlos Acosta since assuming the directorship of Birmingham Royal Ballet in January 2020. The work is inspired by and utilises ‘social distancing’, in response to the evolving way in which dance and live performance can once again be staged.

For more on Lazuli Sky, read our Birmingham REP preview.

Digital Stage In Focus is a new series featuring Sadler’s Wells in collaboration with Hofesh Shechter Company, ZooNation: The Kate Prince Company and Candoco Dance Company across the autumn.

Each company will co-create a takeover of Sadler’s Wells Digital Stage for two-weeks: Hofesh Shechter Company in September, ZooNation: The Kate Prince Company in October, and Candoco Dance Company in November, with three bespoke programmes.

Each collaboration will include a digital screening of a full-length performance made available for a 7-day period on YouTube and Facebook. All text will be subtitled and an audio described version of each screening will also be released.

There will also be a Get Into Dance Workshop – part of new series developed following the success of Sadler’s Wells’ Company of Elders’ workshops, which premiered throughout spring 2020 and received more than 2.8 million visits over the summer. Each company will host 30-minute introductory level dance workshop in their distinct dance style, accessible for all ages and designed to improve fitness, physical and mental wellbeing

The centrepiece is an on-demand screening of the hugely successful Grand Finale, previously staged at Sadler’s Wells in 2017. Performed by a ten-strong tribe of world-class dancers and accompanied by a live band, Grand Finale combines a cinematic score and richly theatrical set and costume design with anarchic energy as it portrays a world in freefall.

Grand Finale will be available via both Sadler’s Wells Facebook Page and YouTube channel from September 17 at 7:00pm (UK), and will remain online for 7 days.

For their Get Into Dance Workshop, the company will give participants the chance to explore Shechter’s distinctive movement style. Hosted by the company’s associate artistic director Bruno Guillore, audiences will learn the company’s daily warm-up (suitable for all ages and abilities). This will be available from September 14.

The final event will be a bespoke opportunity to delve deeper into the work and choreography of the company. In ‘Moving Through Hofesh Shechter’s Grand Finale’ viewers will be able to access two films to learn the ‘Rave’ and ‘Russian Passion’ sections of the piece using simple reference points to explore in depth this euphoric and tribal-inspired piece of dance.

During this time, Hofesh Shechter Company is also presenting new work on its own digital channels. The short film Untitled receives its world premiere for free via Zoom on September 24 and 25. Free for audiences, streamed live, and performed eight times over the two days, this 10-minute short promises to “take the viewer beyond the theatrical boundaries and blur the line of audience and performer, bringing a fresh new perspective to the work.”

The previous week, the live version of Untitled (made in 2005) will be danced by Rachel Fallon at the Torinodanza festival in Italy, the company’s very first live stage performances since lockdown began.

The second digital takeover, Sadler’s Wells x ZooNation: The Kate Prince Company, takes place from October 19-30 with Some Like It Hip Hop available to watch for seven days on Sadler’s Wells Facebook Page and YouTube channel from October 22 at 7:00pm. With a nod to Billy Wilder’s Some Like It Hot and Shakespeare’s Twelfth Night, the hip hop work tells a comical tale of love, mistaken identity, crossdressing and revolution, played out in the company’s trademark style.

The final takeover, Sadler’s Wells x Candoco, runs from November 23-December 4, as part of which, Let’s Talk About Dis will be available to watch for seven days from November 26 at 7:00pm. An exploration of identity and political correctness choreographed by Hetain Patel, the work explores hidden prejudices.

ZooNation: The Kate Prince Company and Candoco will also present a Get Into Dance Workshop, taking participants through a simple dance fitness and wellbeing session in their movement style. Both companies will also create a piece of bespoke digital content, offering audiences a further opportunity to explore the unique facets of these distinctive dance companies. Full details will be made available nearer the time.

Sadler’s Wells artistic director and CEO, Alistair Spalding said, “We are so pleased to be able to present world class dance online and once more on stage this autumn. We are also delighted to be hosting our first socially distant public performances with Birmingham Royal Ballet’s Lazuli Sky. Having artists back on the Sadler’s Wells stage feels like a monumental achievement, in light of the coronavirus pandemic. We hope these performances are just the first steps on the path of reopening fully and welcoming audiences and artists back to our theatres.

“We are committed to continue to work with and support artists, companies, freelancers and Sadler’s Wells colleagues so that we can present work both on stage and online, particularly during a time of great uncertainty for the dance sector, and hope to make more announcements about further plans soon.”

Rambert to present Draw From Within by Wim Vandekeybus