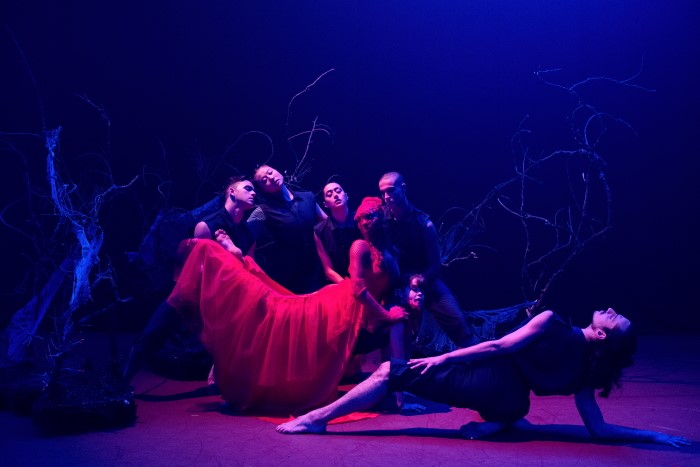 For their fourth in their series of livestreams, which are continuing alongside live performances, Artistic Director Benoit Swan Pouffer has created Note To Self, described as “an ode to memory.” As with previous livestreams, it’s performed in different spaces around the Southbank home, although this time by the young dancers of Rambert2.

The work is a fractured journey through the real and invented recollections and remembrances of memories of Eve. As it flips around her conscious and subconscious, Note To Self is frequently dark and uncomfortable, sometimes quite disturbing. But there are brighter moments, and it has a quite wonderful ending.

We meet Eve, played by the outstanding Karlina Grace-Paṣeda in her dated, if tidy home. A mug turns in the microwave, washing hangs on a drier, the shipping forecast plays on the radio. The latter’s warnings of gales and storms and conditions that are rough or very rough are prescient.

There are strong suggestions that Eve is in the early stages of dementia. There are notes to herself everywhere. She stands, sits, stands again, but can’t remember why she got out of her chair. “Check, check again,” we hear.

What follows is a disjointed journey through memories, where even the imagined becomes real. As Eve, Grace-Paṣeda wanders through them like a ghost. There but not there, revisiting the past as we look into her mind. There are no words but there doesn’t need to be. Her face is wonderfully expressive, her eyes especially, and speaks volumes without them.

Meaning is often cloudy, but then it probably is for her too. The dancers illustrate her confusion. There are strange red figures. She takes a goods lift, where a lift boy continually asks, ‘Which floor?’ When a group of blue-clad dancers gather round her, their thrusting, jagged movement is like demons pressing down on her soul. What initially appears to be a beautiful landscape quickly turns into a place of brutality; domestic violence, perhaps. The one bright moment comes in what appears to me memories of a beach holiday.

The best is saved to the end and what appears to be an acceptance. The final minutes are danced to, ‘Trouble of the World’, a traditional spiritual originally sung by enslaved African Americans. The song is open to interpretation but the lyrics suggest that any suffering we feel is only a test that God has given to us. Lyrics such as “Soon-a-will be done-a-with the troubles of the world, Going home to live with God” also carry a message of hope and emancipation, a belief that, one day, all troubles will be left behind when heaven calls.

In real life, Eve’s flat has a leak in the ceiling. She uses a bucket to catch the water. That leak becomes rain. Tears, perhaps, which soak her and the fabulous ensemble as they dance together. Then back to the beginning. She stands, sits, stands…

It’s all beautifully filmed, although there were several occasions when I desperately wanted to see the bigger picture rather than the individual dancers the camera chose to focus on. I’m also not convinced about the need for strobe lighting, which in any event works much less well on film than it does in the theatre, even watching via a large television. But you can’t fault Note To Self, Rambert or Benoit Swan Pouffer for ambition as they seek to make the most of new opportunities, although I have a sneaky feeling we may also see a stage version of this sometime.

Rambert are streaming Note To Self via Rambert Home Studio until September 18, 2021.