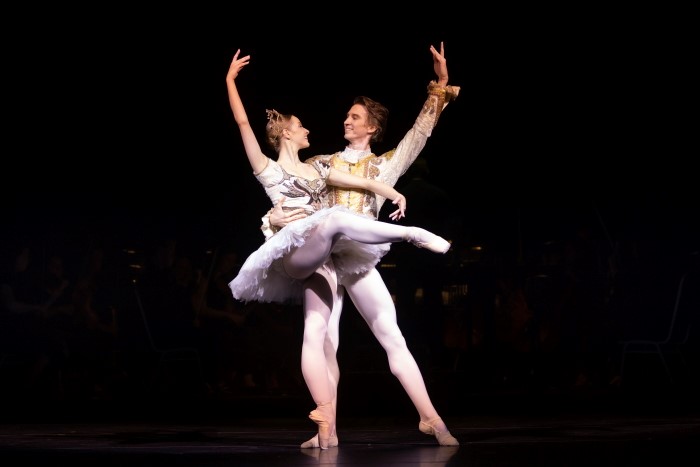 It is quite startling to realise that Rudolf Nureyev has been dead for nearly three decades and that there is a generation of people who never saw him dance live. At least he was of an era that left an extensive legacy of recordings, although that in fact presents something of a problem for evenings such as this.

With two exceptions, the works featured are common to many galas. Those of us who saw Nureyev dance them may have recollections (which invites unfair comparisons of what is being danced live) and those who didn’t would not be able to make much of a connection with him anyway.

The Nureyev Legend and Legacy Gala did not get off to a great start, Ralph Fiennes opening the evening with a speech that could have come straight out of a Cold War film script, He also seemed to be at pains to stress that he isn’t interested in ballet.

Understandably, there was no budget for a set in the cavernous environs of Drury Lane, but it was distracting to place the dancers in front of the orchestra, who were upstage behind a gauze, and who desk lights twinkled like a bizarre star cloth. Still, the dancing made up for it.

Guillame Côté of National Ballet of Canada replaced an injured Germain Louvet in the entr’acte solo from Act II of The Sleeping Beauty with a feisty demonstration that captured the flavour of a young Nureyev, although he was, as is the style today, a lot tidier than the great man ever was.

The highlight of the evening was the extremely rarely performed pas de deux from Khachaturian’s Gayane, a ballet crying out for a modern interpretation (discounting the disappointing Eifman version), not least so we can hear the glorious score. Maia Makhteli was charming and Oleg Ivenko fiery in the dance that introduced Nureyev to London when he partnered Fonteyn for the first time at an RAD gala. It was a pity that it was accompanied by a rather mechanical, souless interpretation by the Royal Ballet Sinfonia under David Briskin of the National Ballet of Canada.

Back to the familiar with the La Bayadère Act III pas de deux danced by Iana Salenko and Xander Parish. It looked rather bare without a set but made up for it with some excellent partnering and acting that managed to create an atmosphere.

It’s always a joy to see Bournonville performed well and Ida Praetorius (replacing Emma Hawes) and Francesco Gabriele Frola in Flower Festival in Genzano did not disappoint. For all of the loose joints and fireworks of ballet in the 21st century, many dancers find the intricacies and subtleties of Bournonville challenging, not least because Cecchetti is not taught as much as it was in Fonteyn’s day. Praetorius was both as strong and delicate as required and Frola’s batterie precise without being flashy. It reminds us that ballet is supposed to be dance not acrobatics.

The Laurencia pas de six is, along with Gayane, the work in this gala that is most strongly associated with Nureyev and not danced in western Europe. Cesar Corales, replacing Marcelino Sambé, joined Natalia Osipova, Yuhui Choe, Mariana Tsembenhoi, Benjamin Ella and Daichi Ikarashi in a lively rendition of 19th century ballet’s version of Spain.

Sleeping Beauty Act III brought us the grand pas de deux with the glorious Vadim Muntagirov who has matured into a very fine artist indeed, here partnering a rock solid Natascha Mair. Muntagirov produced flawless technique combined with the grace and elegance of a true dancer noble and, although he could not usually be more different to Nureyev, he looked very much out of the same mould in this major classical role.

The Act II pas de deux from Giselle was a disappointment. Francesca Hayward danced strangely stiffly, more like a wooden wind-up doll from Coppélia than a figure in a Romantic ballet. She also looked unusually insecure in the adage. William Bracewell did his best but it was impossible not to think of Nureyev’s deep passion as Albrecht, albeit a with rather hammy graveside performance and of course, the incomparable Erik Bruhn and Carla Fracci. This fell well short.

Gayane aside, the excerpt from Neumeier’s Don Juan was the highlight of the evening. Alexandr Trusch and Alina Cojocaru were simply breathtaking in this fascinating piece that avoids the usual clichés as the Angel of Death leads the rake to his last. Trusch showed us the flickering light of a dying roué as he perhaps falls truly in love for the first time in his life. Or should that be death?

Le Corsaire ended the night, its firework choreography impressing some members of the audience who gasped in surprise even if looking a little limited on the restricted stage setting.

Even with the dancers speaking on film of their debt to Nureyev, maybe this was not the best tribute. Then again, what would have been? Nureyev was of his time and certainly would find it difficult to fit into a company today given the many examples where his behaviour was, even then, unacceptable. In spite of his many houses, he remained homeless and in spite of his Tartar soul, rootless. He nevertheless left a lasting legacy, not least through the Nureyev Foundation which benefited some of the dancers appearing in this gala. To really understand his dance, time spent with DVDs and You Tube would be well rewarded.