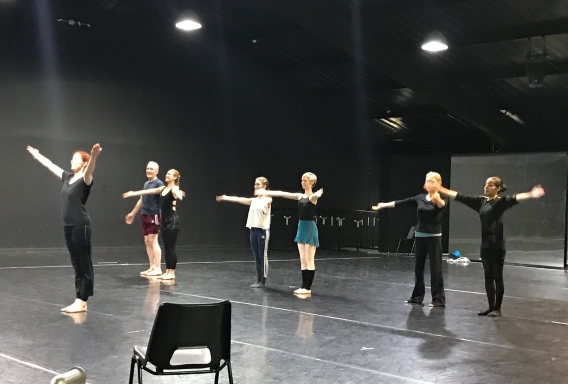 SeeingDance editor David Mead spends a day with New English Ballet Theatre, looking ahead to their new Quintessential programme, and even learning a short section of one ballet.

When the invitation dropped into the Inbox, it was impossible to turn down. Come along and join in with New English Ballet Theatre’s (NEBT) ‘ballet boot camp’ for web-based writers. Meet the company, watch rehearsal of some ballets from the company’s forthcoming programme of five new ballets, and the biggie, learn part of one of those ballets.

So it was that six writers of various actual dancing experience descended on Lanterns Studio Theatre at South Quay, next door to Canary Wharf one Wednesday. The first thing to say is what a cracking space it is; big (the dance floor is 17m square), airy and with tiered seating for 350. Plenty of room backstage too.

We had already had a brief look at a section from Kristen McNally’s Moonshine (to music from the film score of The Grand Budapest Hotel), from what we saw a frequently fast and decidedly quirky affair. Witty rather than laugh out loud funny, I thought the humour worked rather well. It certainly made me smile. But when ballet mistress Jessica Edgley announced that we were going to learn the fast section, I reckon we all wondered what we had let ourselves in for.

After a brief warm-up and short barre, it was into the choreography. I still get to class regularly, so picking up steps or movement is not usually a huge problem, but it’s been a few years since I learned any rep – and even that was dance I was involved in creating, which is always easier. Even I was wondering how on earth I was going to move that quickly, and even remotely as cleanly as the company dancers. In fact, as we quickly found out, apart from the speed Jessica had chosen a great section to teach, not least because it didn’t depend on classical technique.

In the next hour we learned 45 seconds or so of the ballet, slowly building it up the choreography and the speed. There was the usual annoyance of continually getting one particular moment wrong. For ages it just didn’t compute in my head. Strange how there’s always one. But while I can’t speak for everyone, by the end it was there. Funny thing was, even though the movement was quirky and gestural, it did seem to have a natural flow to it. I even felt like the clarity was starting to come too (then again, I haven’t seen any film of it as yet). Did we want to perform it in front of the company? You bet! Getting their applause for our efforts was a nice was to finish.

It was hugely enjoyable, and if I’m being honest I could quite happily had stayed there and carried on. Writing this several days later I can still remember every count of what we learned. That says a great deal about Jessica, everyone else involved and the dance itself.

It was a good day all round, and certainly made me look forward all the more to seeing NEBT’s Quintessential evening at the Peacock. Of the other ballets I saw sections of, I really liked the look of Daniela Cardim’s Vertex, a very classical looking piece to a gorgeous string quartet by Brazilian composer Camargo Guarnieri, who although almost unknown in Europe, is described by Cardim as “the second most famous classical composer in Brazil after Villa-Lobos.” She described the score as “very hard to count, but very lovely.” From the short section I heard I’d second that. I couldn’t help feeling it yelled widde open spaces. In fact, it reminded me a lot of Aaron Copeland’s Rodeo.

There’s more gorgeous music in George Williamson’s Strangers, this time a Brahms sonata for cello and piano, a score that’s full of sweep and passion, beauty and intimacy. A bonus, as with some of the other ballets, is that it will be played live. NEBT has a policy of featuring dancers and choreographers in the first decade of their careers, and the musicians too are at that stage. Artistic director and CEO Karen Pilkington-Miksa explained that they have a close association with Cheltenham Music Festival, which is how they find musicians. “We try to encourage their careers as well,” she said. NEBT also performs at the festival.

Williamson took a few moments to outline his thinking behind Strangers, a ballet that considers how we go through relationships and that even when they break apart, we still have the sense of being very close to that person. Central to it is the notion of being free, including how the woman gets restricted and confined by the relationship, which makes her long for freedom. The cast of three men and three women play a single couple at different points of their life and relationship, although sometimes they are on stage at the same time. Williamson explained, “It opens at the end of the relationship, with them sort of thinking, ‘where did it all go wrong?’ Then it tracks back to the beginning and their meeting, rolling forward to the present. It’s about him coming to terms with the fact she’s not with him anymore.”

Also on the Peacock programme is Land of Nod by Royal Ballet Soloist Marcelino Sambé, described as a journey into a surrealistic dream in the land of the subconscious; and Enticement’s Lure by Valentino Zucchetti, which looks at how temptation and desire affect the relationships of two couples.

The range of works on offer is typical of NEBT. It can be hard in a way going from classical to contemporary or grounded to light, as one dancer admitted, but equally it’s great that you get the massive variety. Another recalled one time recently when they were rehearsing eight new ballets, trying to figure them all out. One day saw them have six 15-minute rehearsals for six different ballets, and class, all before lunch. Hard on the brains but good experience!

The short season at the Peacock looks to be as interesting as ever from a company founded only in 2012. But why start a ballet company at all? After all, more than a few small companies have appeared and disappeared over the years. Karen Pilkington-Miksa explained that what really inspired her was the fact there were so many wonderfully talented graduates in the arts, not just dance, but in the Royal College of Music, in design, theatre in general, but who were struggling for opportunities. “We sponsor people in their training, but then they come out and there are so few jobs. We owe it to them to do something.” It really was all about job creation and giving artists in their first decade a platform. “To dance in London, to be reviewed by the national press is very helpful to one’s career.”

She said it became choreography driven because there was so much response from within the industry. “There are a lot of very good choreographer in companies dancing, but they don’t get the chance to actually choreograph. I think the creation of new ballets to good live classical music has taken precedence now, or at least is now running parallel.”

It’s not a perfect model, Karen admitted. “If we could get a bank behind us it would be great. If we could hire the guests for longer. We need two year contracts instead of one so we can really develop them.” But it is a model that is working, that is generating jobs, and new work, all of which should be applauded.

What’s been the biggest surprise? Performing to acclaim at the Latitude music festival, she said. “People were walking past but just stopped in their tracks when we danced. I would think most hadn’t seen live ballet before.”

I’m not sure if it’s part of a trend, but this is the third time this year I’ve been invited in to a company to see rehearsals and talk to choreographers of new works that are coming up (Birmingham Royal Ballet and Rambert being the other two) – although this is the first time anyone has ever said “come and learn a section.”. I know there’s a view that any review should be based only on what you see on stage, but surely any background knowledge that informs that view should be welcomed. Well, I think so anyway. If it is a trend, it’s to be welcomed.

Rodin and Dance: The Essence of Movement