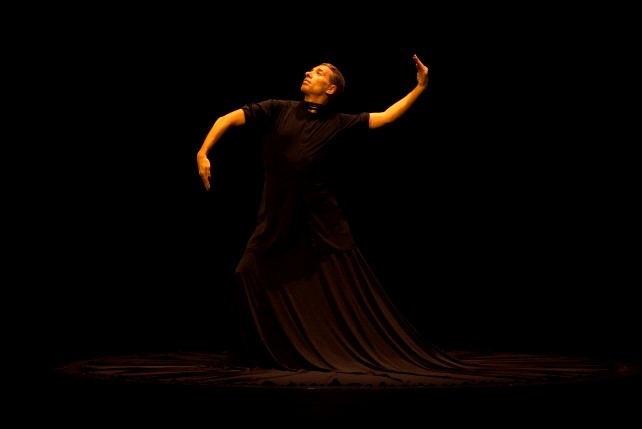 From Mats Ek’s Rite of Spring to a very different, flamenco-based version from Israel Galván, giving London has the rare opportunity to make a comparison of a seminal work in two guises.

Sandwiched between some Scarlatti and a blues tune, the baldness of Stravinsky’s version for four hands, here played using two pianos by Daria van den Bercken and Gerard Bouwhis, both strips and reveals. As the pianists knit their fingers in the fiendish demands of a score once considered unplayable, the voices of the pianos remind us that it is a work that, for all its Russian-ness, owes much to French impressionism. As the programme notes acknowledge, it is music with freaky bones which defy all laws of musical anatomy.

It can rarely, if ever have been accompanied by amplified zapateado; and what footwork it is. Galván has legs of steel and the stamina of an ox. He is rarely off stage in the work’s 75 minutes and, even when sitting, flings everything out at a rate of knots. The brace is much more fluid and owes less to flamenco, although body slaps are standard as is the pitos, again delivered at lightening speed that makes them sound machine-initiated.

Galván uses heavy amplification of rosin covered boards that are at times reminiscent of a sand dance, but not a whiff of Wilson, Kepple or Betty. This is crazy stuff, at times the bass thumps resonating with the very metal of the auditorium, never mind the sternum. He even executes zapateado in bare feet, with no diminution of power.

It all makes for an oddly intellectual experience that goes far deeper than the spectacular or technique for technique’s sake. One comes out feeling awed and moved but by what, it is difficult to articulate.