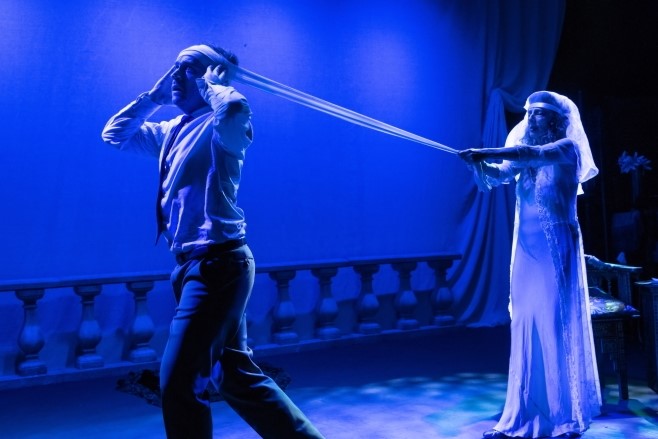 Fraud, femme fatale or fallen star? In many ways, dancer and impresario Ida Rubinstein was all three as Christian Holder’s play that combines text, movement, music, projections and film, confirms. If she is remembered at all it is as a footnote to the history of the Ballets Russes. It was Léon Bakst that introduced her to Michel Fokine and Serge Diaghilev and she certainly literally embodied their visions of exotic orientalism.

Like Adele Bloch Bauer for Gustav Klimt, Rubinstein’s Jewish heritage made her intrinsically exotic almost in spite of her Russian heritage. She had a hard head on her shoulders and threw herself into the avant-garde to which her wealth and connections gave her entrée. Her willingness to display her physical attributes on the public stage surely helped too.

Rubinstein’s generation drew the short straw of living through two world wars and many other catastrophes and it is this that Holder uses as a link for his narrative of her final days. Edward Clement arrives as a journalist but is revealed to have been an Anglo-French former airman who had been nursed by Rubinstein in East Grinstead, and whose father had seen her in a benefit performance in the First World War. Gradually Ida evaluates her life and loves and Holder retains the hope that, although dying almost alone and in obscurity, the heroic airmen can reignite her faded star.

Ida Rubinstein – The Final Act gallops through a full life but does not entirely dispense with clichés along the way.  A few nerves were apparent on opening night but all the cast warmed to their roles as the evening progressed.

Naomi Sorkin, an actor and former ballerina with American Ballet Theatre, is convincing in this her second outing as Rubinstein as she recounts the Russian heiress’ dramatic life. Indeed, she got more and more Russian as the show went on. We hear how her scandalous portrayal of Salomé led to her embarrassed family committing her to an asylum. Luckily for her, her grandmother, who had brought her up when her parents died, thought that even more of a stigma than dancing. She was then canny enough to make a marriage of convenience with her cousin to give her direct access to her fortune. Money attracts money though, and she had a string of wealthy admirers, many of whom were lovers.

She also recounts her rise to the heights of fame in Paris, her bisexual love affairs, the assassination of her long-time lover Lord Moyne, and her selfless devotion to wounded soldiers in both World Wars.

Max Wilson as Clement is less convincing, however, providing a certain woodenness for English reserve and emoting for passion. As the maid, Soretto, Katherine Worth has a French accent that has distinct English overtones. She was much more comfortable and convincing as Romaine Brooks, spurning her former lover at the last.

It was Rubinstein who commissioned Boléro from Maurice Ravel. Darren Berry is convincing as the composer, and expertly blends recorded and live music. Someone playing Ravel, playing Ravel, must be fairly unique.

BAFTA and Emmy Award winning David Roger’s designs work well in the limited setting, and the use of projection is clever and effective.

Ida Rubinstein perhaps belongs in the pantheon of dilettantes such as Isadora Duncan and Loie Fuller who attracted followers at the turn of the 20th century in the era of free love (at least amongst the wealthy) and experiment when novelty and spectacle meant as much to some audiences as technique does today. None of these women had what we or their contemporaries would recognise as solid dance ability, but they left their mark nonetheless. They also made their way as independent women in a man’s world, albeit with a lot of indulgence. This is perhaps why they can be celebrated today.

Ida Rubinstein – The Final Act is a more than interesting evening, but one that (rightly) does not elevate its subject beyond her due.

Ida Rubinstein – The Final Act is at The Playground Theatre, Latimer Road, London to October 16, 2021. Visit theplaygroundtheatre.london for details and tickets.