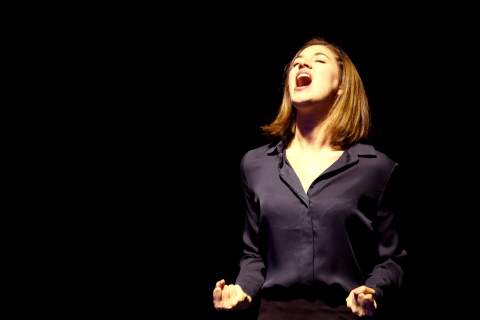 The set is bare. A chair, a rotary dial telephone on a desk. That’s it. It’s a waiting room of sorts. In walks the smartly dressed Elsa Couvreur. Although it’s never explicitly stated, we sense she’s arrived for a job interview. After she settles in, the phone rings. “Hello, all of our operators are currently busy, please wait,” says one of those incredibly annoying automated voices, followed by an even more annoying synthesised version of Beethoven’s “Ode to Joy.”

Couvreur experiences quite a bit over the next hour of The Sensemaker but joy is not among. As she waits awkwardly, the computerised voice gives her a set of instructions. As she blindly but uncertainly follows, the tension increases as she gets increasingly frustrated. But this is a job interview. And it’s a job she wants, so despite everything she does as she is asked.

There are amusing moments as she finally starts to make headway through the automated messages, only for several steps backwards to be made later. Through it all, Couvreur utters not a single word. Her facial expressions say it all.

The amusing becomes increasingly uncomfortable, disturbing even. When the voice tells her to strip off and turn around, she pauses but complies. Her obedience is unsettling. Just how far would she go? Would we be just as compliant, as subservient, as unquestioning? How far would we go? Indeed, just how much do people think but then remain silent and blindly follow.

I’m not sure how you categorise the well-paced The Sensemaker but it is a remarkable solo performance. Couvreur’s presence holds the attention well. When she looks at the audience you feel she is looking at you, ‘speaking’ personally. It also certainly makes you think.

The Sensemaker is at ZOO Playground to August 26. Visit zoofestival.co.uk for details and tickets.

Superb dancers but a guide needed: Goliath in the Water by Modeun Company