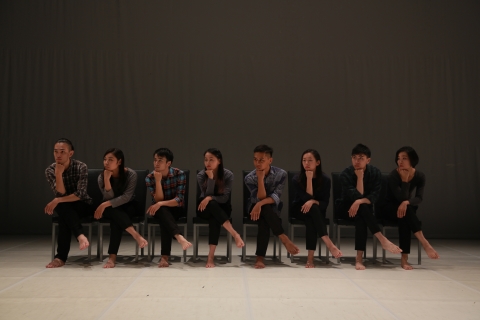 For this year’s Focus Dance (焦點舞團) programme, Grassroots (草根限定), Taipei National University of the Arts (國立臺北藝術大學) turned to young French choreographer and teacher Lucas Viallefond and Hofesh Shechter dancer and TNUA alumnus Chang Chien-ming (張建明) for the feature opening and closing works, with decidedly mixed results. The evening’s student choreography showed plenty of healthy green shoots. Their work is certainly more polished than generally seen from a lot of similar young dance-makers although the familiar issues raise their head. Needless to say, the dancing throughout was excellent almost without exception.

After training in Paris, Viallefond spent time at the Folkwang School in Essen and with many people connected with Pina Bausch. Things clearly rubbed off, each of the four songs that make up his affectionate Every Little Movement, echoing those glorious ensemble sections created by Pina Bausch that often repeat a relatively simple phrase.

The title comes from the Judy Garland’s version of Every Little Movement (Has a Meaning All Its Own). You could hardly get more appropriate because the whole work is jammed with gesture-driven dance. Before the Garland (which makes clever use of a line of chairs) come three other variations on the theme to Al Bowley (Guilty), Vangelis (One More Kiss, Dear) and Bob Marley (No Woman, No Cry).

Everyone will have their favourite but mine was the Bob Marley, which included a playful duet for two men and an innovative solo that turned into a trio, all performed while the rest of the cast acted as a backing group (the Wailers maybe?). While all make you smile, and all stand excellently on their own, a little more variation somewhere in the middle wouldn’t have come amiss. Less successful are the joins between the songs. Viallefond clearly decided he couldn’t segue straight from one to the next, but the links all feel awkward, and having the cast ‘la, la-ing’ was not one of his better ideas.

The rest of the audience clearly were not as taken with it. Perhaps it was too good natured, perhaps it was the style or the music, perhaps they didn’t get the references, but the reaction was decidedly muted and polite.

Such is the gravitational pull of black holes that they pull matter inexorably towards them, never allowing it to escape. That certainly seemed to happen with Chang’s Black Hole. While Viallefond’s background is evident in Every Little Moment, if ever there was a work that shows how choreography is influenced by personal experience, Black Hole is it. Right from gravelly voice-over opening (Sun, rather oddly in English) to the fast-rewind ending (Political Mother), it looks and feels too much like a series of moments from his works over many years tossed together, stirred and served up (although a bit brighter and certainly less loud than might be expected).

Predictable, Black Hole is not, but while individual sections work within themselves, as a whole it sorely lacks focus and structure. It was danced with huge energy, though, the whole cast grasping fully the experience of working with a movement vocabulary different to that they normally experience. The audience loved it, but if you want to ‘do’ Shechter, I can’t help wondering why not do it properly? A shorter work or an extract of a longer one, maybe.

Of the student works, I particularly enjoyed Endless (無終) by Shao Hsing-wen (邵倖紋), a martial arts-inspired piece full of clean lines and excellent structure. It also comfortably won my prize for best costumes of the evening, the dancers all in classy-looking white shirts and wide black trousers/skirts.

Relationships are about complimenting, sharing and mutual connection. In Relationship (人) by Huang Ching-heng (黃敬恆), the latter is described physically, dancers Shao Hsing-wen and Hsu Yi-chieh (徐翊傑) never parting. It was beautifully danced, the pair forever rolling around, cradling and supporting as smooth as could be.

There was a relationship of a very different sort in Pan Hung-ming’s (潘泓銘) Monologue, which vaguely hints at two women in some sort of crisis (another cast features two men). Whatever, they seemed to spend a lot of time running side-by-side in a huge circle, before finally walking into the upstage darkness as they undress.

Beyond by Kao Min-chen (高旻辰) is an odd affair. Kao clearly has choreographic promise because each of the two sections is very neatly constructed. The problem is that neither bears any relationship whatsoever to the other. Other than the costumes, it looked and felt like two very different pieces. First comes a near-classical pas de deux, on pointe, to Schubert’s Ave Maria. It was beautifully danced by Lin Hui-chu (林彙筑) and her rock-solid suitor Lo Li-an (羅立安), although he gets little to do but offer support. Quite why the group that spends most of time lined up at the back are there is anyone’s guess, though.

Then comes a largely contemporary ballet section, without a pointe shoe in sight, to totally different music, and with a totally different, quite upbeat mood. Unfortunately, this was also the one occasion during the evening when the dancing slipped with some of the men’s jumps and even some single pirouettes looking shaky. And if men are going to do fouettés rond de jambe (and there’s no reason why not; they can be very effective), they should be done with power and attack, and in the right context; none of which was the case here.

Completing the programme was Ritual of Peaceful Departure (呢喃闕) by Fang Jun-wu (方駿圍), a solo about dancing at a graveside as a way of speaking to a dear departed; and Cycle, a trio by Lo Li-an (羅立安) that considered fragments of events that happen as we ride the waves of time. Maybe there were too many fragments, but even though quite short, it felt confused. I could also have done without what appeared to be a violent attack by the two men on the one woman.