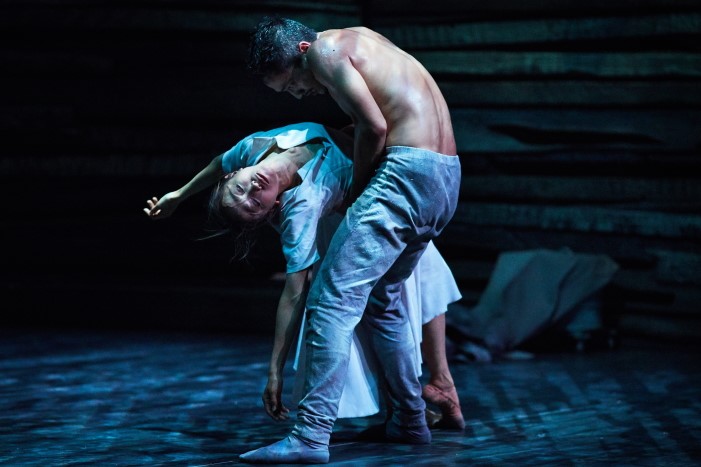 Twice postponed thanks to the pandemic, Akram Khan’s Creature has finally reached the stage. In it’s lead role, Jeffrey Cirio is quite simply magnificent. There are strong performances from Erina Takahashi and Fabian Reimair too. Tim Yip’s set and costume designs are brilliant too, as is Michael Hulls’ eerie blue lighting that so perfectly evokes the cold Arctic. But cold is also just how it leaves you. I should have cared for the Creature and Marie, I wanted to care for the Creature and Marie, I wanted to engage with them; but, and strangely, I really struggled.

What is Khan’s third collaboration with the company, and his second full-length production following his brilliant Giselle, is largely inspired by Georg Büchner’s expressionist classic Woyzeck, with hints of Mary Shelley’s Frankenstein.. Set in a dilapidated, ramshackle wooden-walled former Arctic research station that hints are being left after some environmental catastrophe or global conflict, it is unrelentingly dark and despairing. Quite what that disaster might have been, like a lot of things, is never made clear, even in the synopsis.

Here, the Creature is part of an experimental military programme. He’s being abused and exploited as he’s put through extreme mental and physical tests in preparation for an unstated mission to colonise new worlds. By the time we meet him, he’s already lost his dignity and sanity. Pretty much all he has left is Marie, his keeper, with whom he is in love. He will soon lose her too, before being abandoned when it’s time for the brigade of soldiers to leave on their operation.

From the first moment, Cirio is mesmerising. Pathetic one minute, powerful and determined the next, every look, every movement has meaning. His Creature is a tortured soul, but no so broken that he doesn’t have feelings. He still wants a connection with people and is still capable of love, even if he’s not entirely sure what that is.

He blurs the lines between human and animal. He cradles Marie tenderly, but then also nuzzles her. His movement is sometimes powerful and direct, but then melts juicily into a more sensuous moment. At times, he’s quite childlike, not least when he sits Marie in her mop bucket and wheels her around playfully. Soon after, he stands and looks down like a scolded child.

As Marie (Woyzeck’s common-law wife in Büchner’s play, and from which Khan uses all the major names and characters), and despite being on stage for most of the work, in one sense, Erina Takahashi doesn’t get a huge amount to do. When she’s not mopping the floor, she’s scrubbing the table. It sounds deathly dull. And yet, what presence. She may not be dancing in the usual sense, but her whole body still speaks. Kind and tender, she is quite compelling. Although the Creature clearly loves her, as seen in a duet and a touching scene in Act II after she has been killed by the Major, I’m not convinced those feelings are only reciprocated in a maternal sense.

Dressed in anonymous light grey, gender-neutral boiler suits, the corps dance powerfully as the soldiers of the base. The ensemble dances have ebb and flow and there’s some neat patterning, but they do feel a little long and never really advance, magnify or even really illustrate the narrative. The stylised choreography also takes away most sense of menace.

The other named characters are terribly undercooked. There’s a hint of some sort of a relationship between Stina Quagebeur’s Doctor and the Major, and she does at least get one impressive solo that has quite a taste of contemporary kathak. Andres (Victor Prigent) does little but hang around in the background. There’s certainly no sense of him being a foil for the Creature as in the play. The Captain (Ken Saruhashi) is so sidelined that he doesn’t even feature in the synopsis.

A number of people left at the interval (never a good sign), which was a shame. With the corps largely banished, allowing us to focus more on the main characters and the narrative, the second act is definitely the better of the two in terms of drama, story and, it has to be said, length.

In Act I, Khan shows us that the Major (Fabian Reimair) is arrogant and abusive. Now we see just how much he is truly nasty piece of work. While he has eyes for Marie, when they dance, the advances come only from him. Even then, the depth of his feelings seem questionable. One wonders what he really wants her for. His subsequent murder of her is certainly cold and unfeeling.

That sets Cirio’s Creature off in another magnificent dance, this time of unspeakable rage. As the soldiers leave, he’s left now abandoned and truly alone. But, weirdly, even here, I didn’t really feel for him. The final scene, which I will just say involves Tim Yip’s set (I won’t give details away), is a masterful piece of theatre.

Vincenzo Lamagna’s score is as harsh and unremitting as the Arctic landscape outside the research station. There are hints of religious chant and a remix of Ravel’s Bolero, but it’s largely a never-ending wall of sound. Loud, but not desperately uncomfortably so, it’s not exactly pleasant but it does sit well with the unfolding story.

English National Ballet are to be applauded for the way they continue to try to expand the company repertory, taking it in new directions while still hanging on to old traditions. Unfortunately, Creature is beset by a vague narrative that, despite Cirio and Takahashi’s stellar performances, ultimately fails the work.

Akram Khan’s Creature (a co-production with Belgium’s Opera Ballet Vlaanderen) is at Sadler’s Wells until October 2, 2021. There is no UK tour, the only other dates announced being at the Harris Theater, Chicago, from February 24-26, 2022.

Dark days, inner voices and coming through: Nobody by Motionhouse