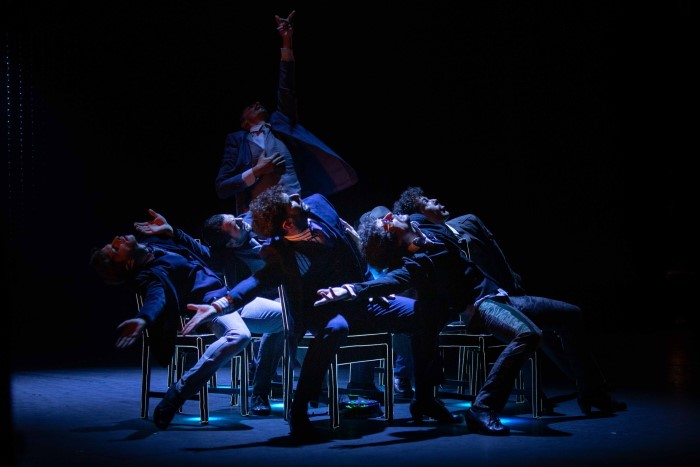 Flamenco is a paradoxical art. Its fixed forms are only part of what makes it conservative, yet it is the art of the outsider, the Gitano, that has sucked in a myriad of other forms and cultures in its travels across the globe. Bringing in formal dance forms, ballet and contemporary dance to name but two, is merely a recent incarnation of this habit. But the very title of this evening is transgressional: flamenco doesn’t do jumping.

It perhaps isn’t surprising, as flamenco has never shied away from sexuality, to see another show in this year’s festival purporting to examine gender fluidity, but El Salto could not be more different to ¡Viva!. In essence, a stage full of men dancing as women can easily sustain an hour-and-a-half when done with respect and integrity but 90 minutes of men here had more ebbs than flows. Choreographically, we are basically talking zapateado and pretty empty it was too.

El Salto opens with the company spinning in large pink skirts, like so many not-quite-whirling Dervishes, as electronic ‘music’ scrapes along in the background. After what seemed like an age, they eventually, predictably, unhooked the skirts and swirled them briefly like a capote de brega. From then on, the show lurched between halfway decent traditional flamenco (especially good cante from José Valencia) and everything including the kitchen sink.

We were even subjected to one chap bouncing up and down manically flapping his arms as he executed the batterie of Bluebird. Heaven knows why. Inevitably, the shirts came off, to leave flapping waistcoats, Putin on a horse style. In that unfortunate example, one yawningly wonders how much antihistamine must be needed to deal with the resulting mosquitoes. The mind wandered here too. The men formed themselves into a passable imitation of Théodore Géricault’s The Raft of the Medusa while the singer virtually yelled “fire” at them. Sadly, my extremely limited Spanish failed me when he asked of Jesús Carmona, “Why do you…” What I will never know because I didn’t recognise the next word, although it did promote the mental retort “Why indeed?”

Carmona shot off yet another volley of fast and furious zapateado and then crumpled in a heap, emoting sobbing loudly into the over-amplified sound system. It was painful for all the wrong reasons; utterly unconvincing not only because it was so forced and superficial, but because it came from nowhere.

Somehow, he perked up but then took his shoes and socks off a gave us ‘silent zapateado’. It would have been wise to stop there, but no. He went on via the tighty-whities to the full Monty after a spell of headache inducing strobe lighting, but chickened out and turned his back. How ironic in the week when James Rado died at the age of 90 that these men should think their actions so daring five-and-a-half decades after Hair broke the mould.

El Salto was almost a parody of ¡Viva! – a perfect example how a similar idea can go so badly wrong and throw the flamenco baby out with the bathwater in the process.