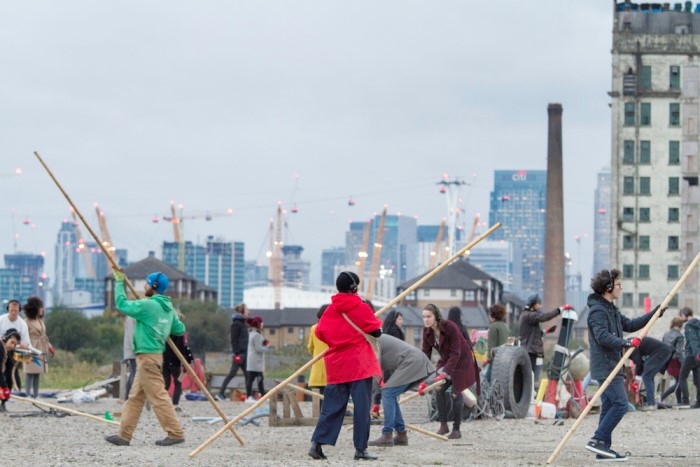 Is this a Waste Land? by Charlotte Spencer Projects
Photo Pari Naderi

Pieces of pipe and plastic coral, logs, books, baskets, crutches, skis, signs, toy cars, singular shoes. I passed them all along as part of a chain formed during Charlotte Spencer Projects’ Is this a Waste Land? The show has toured various locations in the UK, landing for the moment in Bridgewater at the Queen Elizabeth Olympic Park. I felt a rush as the narrator’s voice urged us through headphones to “work faster” and we began slinging the items between each other in the dying light, overlooked by the stadium, Anish Kapoor’s ArcelorMittal Orbit and a huge moon. But it was short lived as a sense of foolishness crept over me. Why was I tearing down a mound of rubbish only to rebuild it in another part of this desolate, tarmac expanse, with a bunch of strangers somewhere in Stratford?

My experience of the performance was typified by such seesawing emotions – excitement and embarrassment, exhilaration and awkwardness – as Is this a Waste Land? engaged its audience members with each other and an abandoned, urban space in unexpected, physical ways.

The first instruction was to select an object from the motley pile of things spread out in front of us. They looked like junk, but their careful arrangement suggested otherwise. Certain objects, like a mobile phone with an aerial, did trigger a swell of nostalgic excitement. Whenever I was on the cusp of a decision, something else would catch my eye. Other audience members were similarly wracked. One man exchanged various cumbersome items before finally grasping the handle of a green suitcase. “I feel like going on holiday,” he said. “I feel powerful,” grinned a lady brandishing a drill. I chose a grey calculator with a flip lid, small and smooth as a pebble.

The spectacle of a large group in headphones processing silently in single file onto a ‘waste land’ in the middle of London clutching an array of teapots, drying racks, furry toys and chair seats must have been arresting and absurd. The narrator invited us to “decide and explore the space’s limits…pause…look over your right shoulder, allow your gaze to sweep slowly to the left.”

We were separated into different streams and set tasks: build a fence together; a wall; make a ladder out of sticks and rope. While being forced to stop, watch, and perform physical actions provided a pleasant contrast to my sedentary office job; at times I felt faintly ridiculous. Then I would be distracted from my self-consciousness by the sight of another group creating a structure, or handful of dancers grappling with great swathes of tarpaulin that looked like huge kites sailing across the expanse. Set against the urban landscape, these images were beautiful and otherworldly.

Questions like, “What is this land, waiting to be something else?” encouraged more profound consideration of the space and our place in it, as did instructions such as, “Look at the tower.” I was unsure how to respond to the latter. Did the narrator mean the surrounding council blocks, new developments or teetering towers of stuff thrown up by the dancers? The show did not offer clear answers, just time to reflect on what should be given attention on the London skyline.

Is this a Waste Land? was an unusual dance show in that audience involvement was central, and the dancers’ main function was to manipulate us rather than perform. This was particularly effective towards the end as we all gathered into a circle, leaning back into the rope binding us. The dancers acted as disruptors, randomly jerking the rope forwards. In doing so, they increased the exertion required from us to maintain our positions, already precarious as we were each responding to the simultaneous adjustments of the other 90 audience members. It was elating to be feel so physically aware and connected after so many months of keeping a distance.

Carlos Pons Guerra’s Mariposa, an inclusive reimagining of an opera classic, finally gets its premiere

The Place Korean Season: W.A.Y (re-work) by Sung Im Her